Getting back on track after a slip

Even though I’ve been in great shape for 15 years, due to a genetic issue, I need to work much harded than most people to keep my weight in check. Here's how I do it. 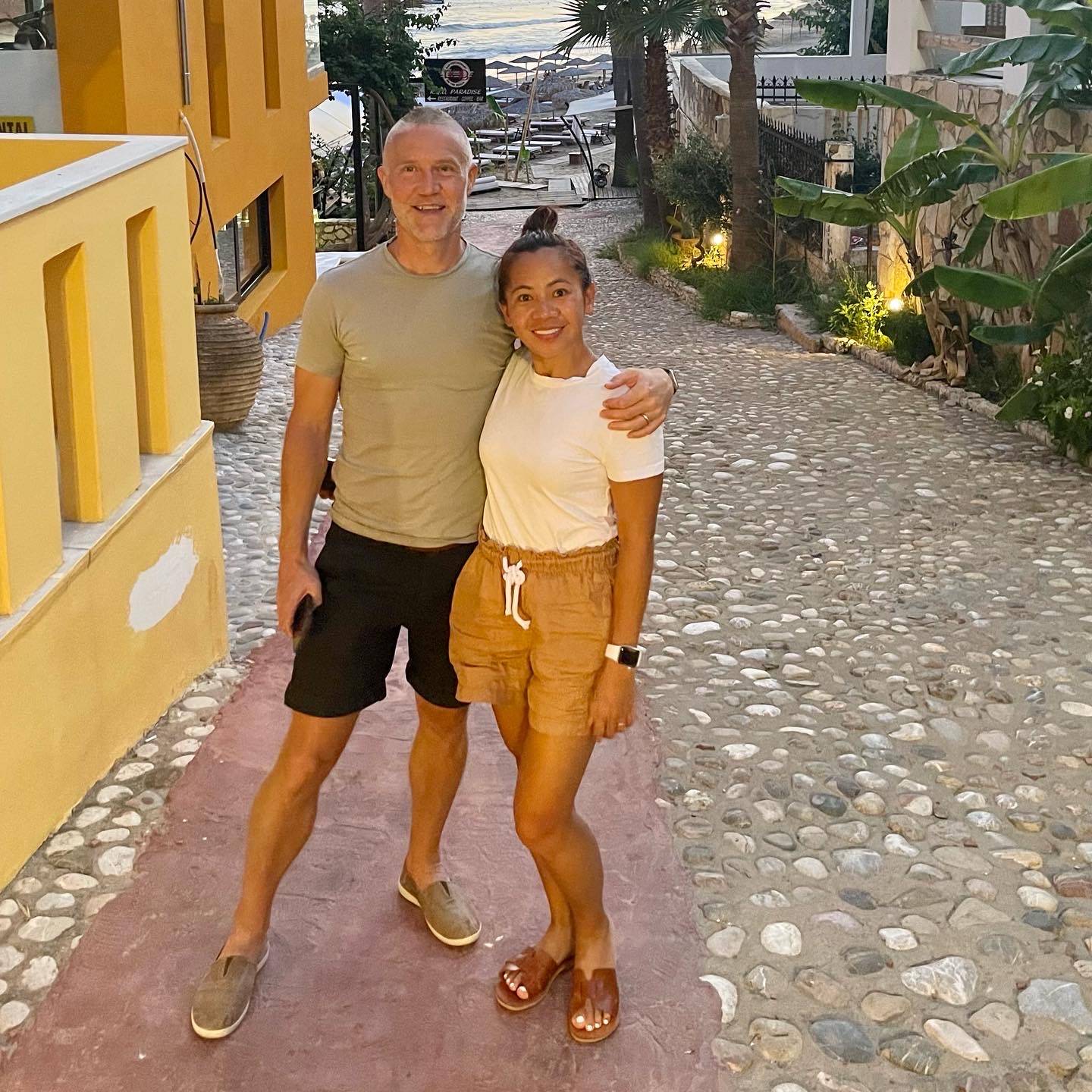 If you’re familiar with my health journey, you’ll already know that 15 years ago I was borderline obese.

With some basic education on nutrition and exercise, I lost 25kg and found a way to keep that weight off permanently.

I’ve built on that by achieving MSc level education in Clinical Nutrition, and co-founding ingfit to help people succeed on their own weight loss journeys.

Even though I’ve been in great shape for 15 years, I still need to work at it, primarily because I have several genetic polymorphisms which massively increase my risk for obesity (more on that later).

Due to this genetic issue, I gain weight much more easily than my friends and family so to stay in shape, I need to work harder than most.

In this article, I share exactly what I do to manage the ups and downs.

Follow these principles and you too could stay in great shape forever.

What deviating from discipline means for me

I spent some time in Europe this summer and consciously relaxed my normally tight rules on nutrition.

I didn’t go completely crazy, but I enjoyed dessert, carbs and a few pints of beer with my Dad, and ended up gaining a few kilos of body fat.

2kg may seem like nothing, and it isn’t, but that’s a much as I ever let things slide.

This is one of the reasons why I’ve kept off the weight I lost for over 15 years ago.

For me, the key is to always keep a loose handle in things to ensure things don’t get completely out of control.

This is where I see a lot of people get into trouble with their weight during the holidays; they have a couple of bad days which turn into weeks or even months of bad behaviour!

This is not good.

Live your life, eat your cake but don’t be a glutton.

You should have plenty of time on holidays to stay active so get those trainers on and walk everywhere!

When I’m dialing things back in after the summer, I return to my 5 principles.

Getting into the right mindset is critical. I break it down as follows:

Understand your goals – Spend some time really think about your goals. Why exactly do you want to lose weight? What does it mean to you? Write them down. Writing down your goals makes them real.

Take accountability – Stop blaming others for your current state. There is only one person who is going to ensure your success of failure, and that’s you!

Think long-term – Stop thinking short-term! If you really want to succeed, accept that this is a life-long endeavor. Ever searching for a quick fix is setting you up for failure.

Your real goal isn’t just “weight loss”. Losing weight may well be the first step on your wellness journey, but you should really be thinking about the big picture: longevity!

In order to optimse your health for the long-term, you need to understand the basics on the main pillars of health: nutrition, exercise, sleep and stress management.

Nutrition is where I would recommend starting as this is the main lever for weight loss (not exercise).

Understand the very basics first, then build from there: calories, macronutrients, micronutrients.

Even though I have a Masters Degree in Nutrition, I am still learning every single day.

If you believe that calories don’t matter, I would strongly advise you reconsider.

There are two popular theories on calories and obesity: Calories In Calories Out (CIO) and the Carbohydrate Insulin Model of Obesity (CIM).

CIM is postulates that the key driver of obesity is insulin. When insulin levels are high, the body stores fat in adipose tissue. As cells get fatter, they remove energy from the body which would otherwise be used for other metabolic requirements.

This is a gross oversimplification of a very complex subject and I will cover each off in more depth in the future.

In essence, both models attempt to establish a biological mechanism for obesity but neither have conclusively succeeded.

What keto advocates may not be aware of is that both models agree that the law of thermodynamics holds true, in that in order to lose weight, a calorie deficit needs to be achieved.

So what does this mean for you right now? Science aside, just let me say this.

We all know people who have been very successful in losing and maintaining weight by managing calories (me included), but, we also know many people who have not succeeded using CICO alone.

Equally, we could say exactly the same thing about keto. It works for some people, doesn’t work for others.

My advice to you is this: keep an open mind. I know for a fact that managing calories works as that is exactly how I lost all my weight and kept it off.

But I also know that I have much better control over my appetite when I’m in ketosis, which may well be related to insulin.

The important thing is to find a solution that works for YOU. The best diet is the one that works, so having the knowledge on both models is sensible.

Start by educating yourself on the basics of the CICO model.

In order to lose weight in an optimal manner, target a calorie deficit of around 25%.

If you find it easier to control yourself on keto, then do keto, but don’t be afraid of carbs if you can tolerate them.

There are 4 main pillars of health that I consider when getting things back on track: nutrition, exercise, sleep and stress management.

All are important for weight loss so we need to consider them all, but your weight is governed primarily by nutrition so developing a nutrition plan should be your priority.

Remember, abs are made in the kitchen, not in the gym!

Here’s how I approach each pillar.

No alcohol. This is my number one. I enjoy alcohol, being British ‘an all, but it has to be in moderation. It leads to bad decisions and can foster negative thoughts if done regularly, so while dialing things back in, alcohol is the first thing to go.

No sugar. No brainer. Like alcohol, for me at least, sugary foods lead to more sugary foods. There are plenty of sugar-free alternatives out there if you need to curb a sweet craving.

Wholefoods. No take aways. Proper meals, made with ingredients bought from the supermarket. Real food is the key to optimal health.

Protein. Protein is the single most important macronutrient and getting this wrong is the biggest mistake I see in my clients. Build your diet plan around protein, not fat, not carbs. Aim for 1.5-2g protein per kg bodyweight, not the 0.8g recommended.

Carbs. Personally, I follow a lower carb approach but cycle carbs back in depending on how I’m feeling. I check my ketone levels regularly, but I’m more interested in hitting my calorie targets than my carb targets.

Planning. Develop a meal plan and purchase the groceries you need to follow the plan, in advance! I use Carb Manager.

Tracking. Update my meal plan in real-time depending on what I actually eat. There will be deviations from the plan.

Conscious eating. Eat at the table, no devices, no TV.

Time restricted feeding. I work out in the mornings, so I prefer to eat breakfast shortly after exercising to get protein into my system. I practice TRE by cutting of calories around 4 hours before bed, which is usually around 5pm. This allows me to “front load” calories and it’s a method that allows me to drop body fat, every single time.

Here's a sample from Carb Manager. 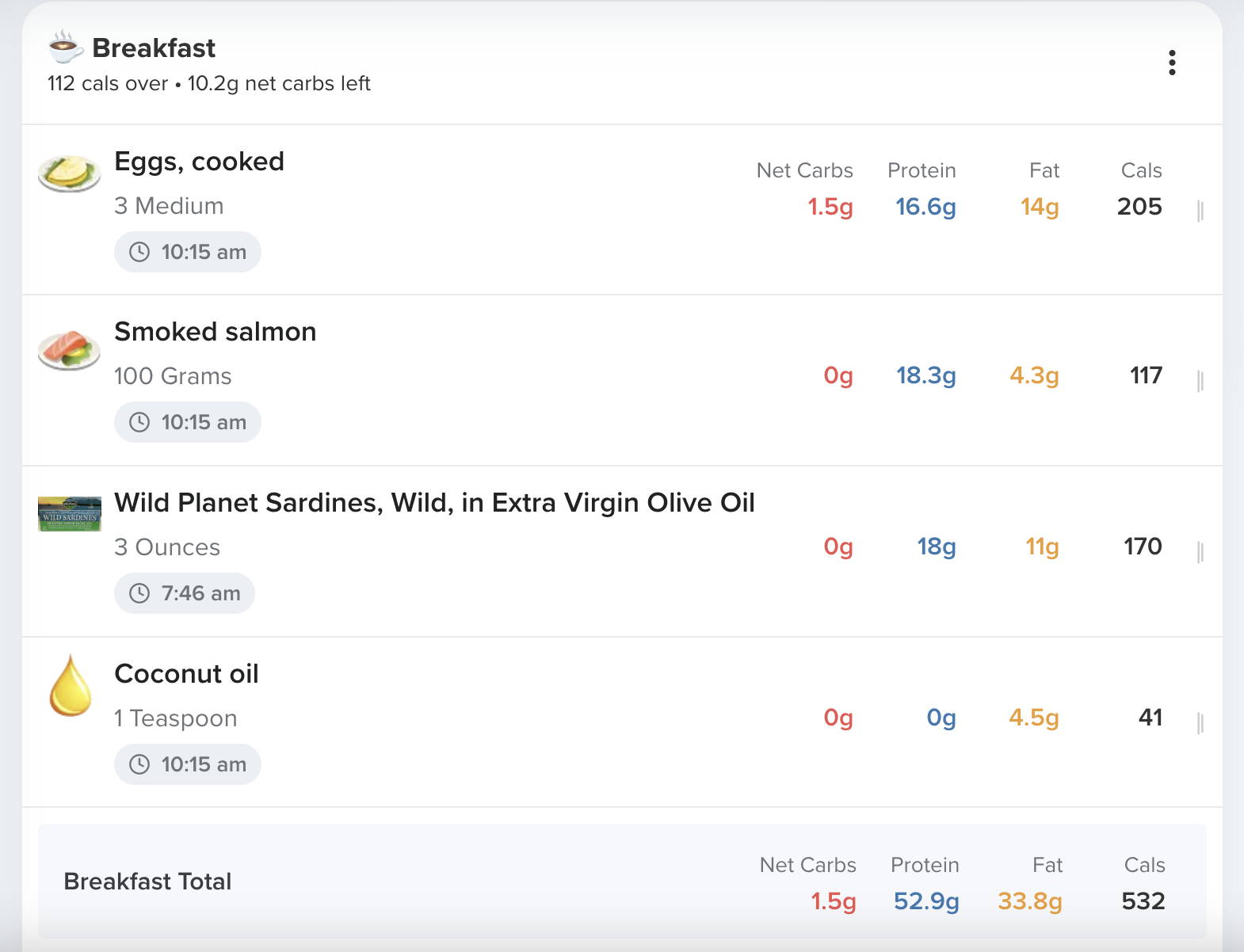 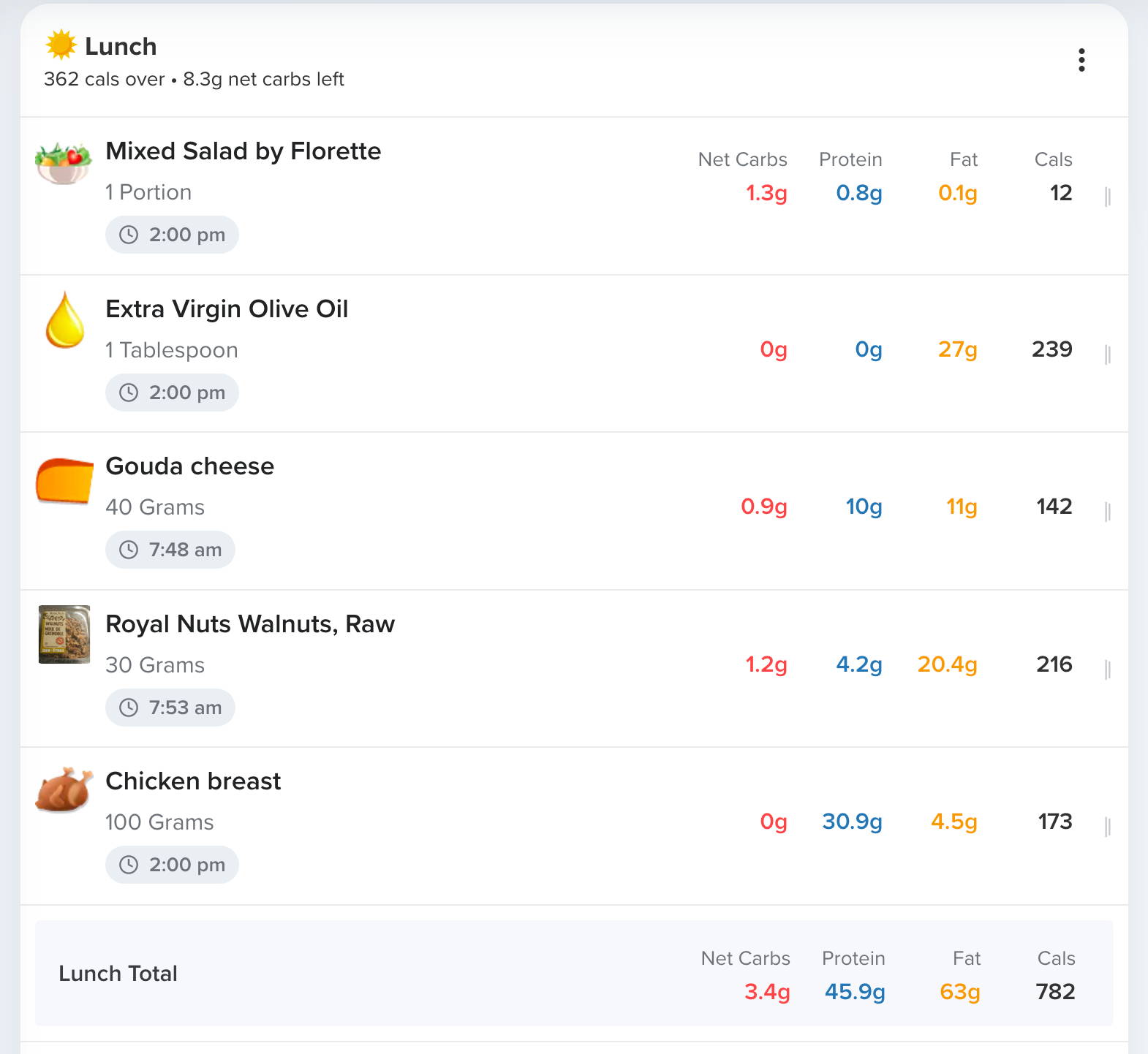 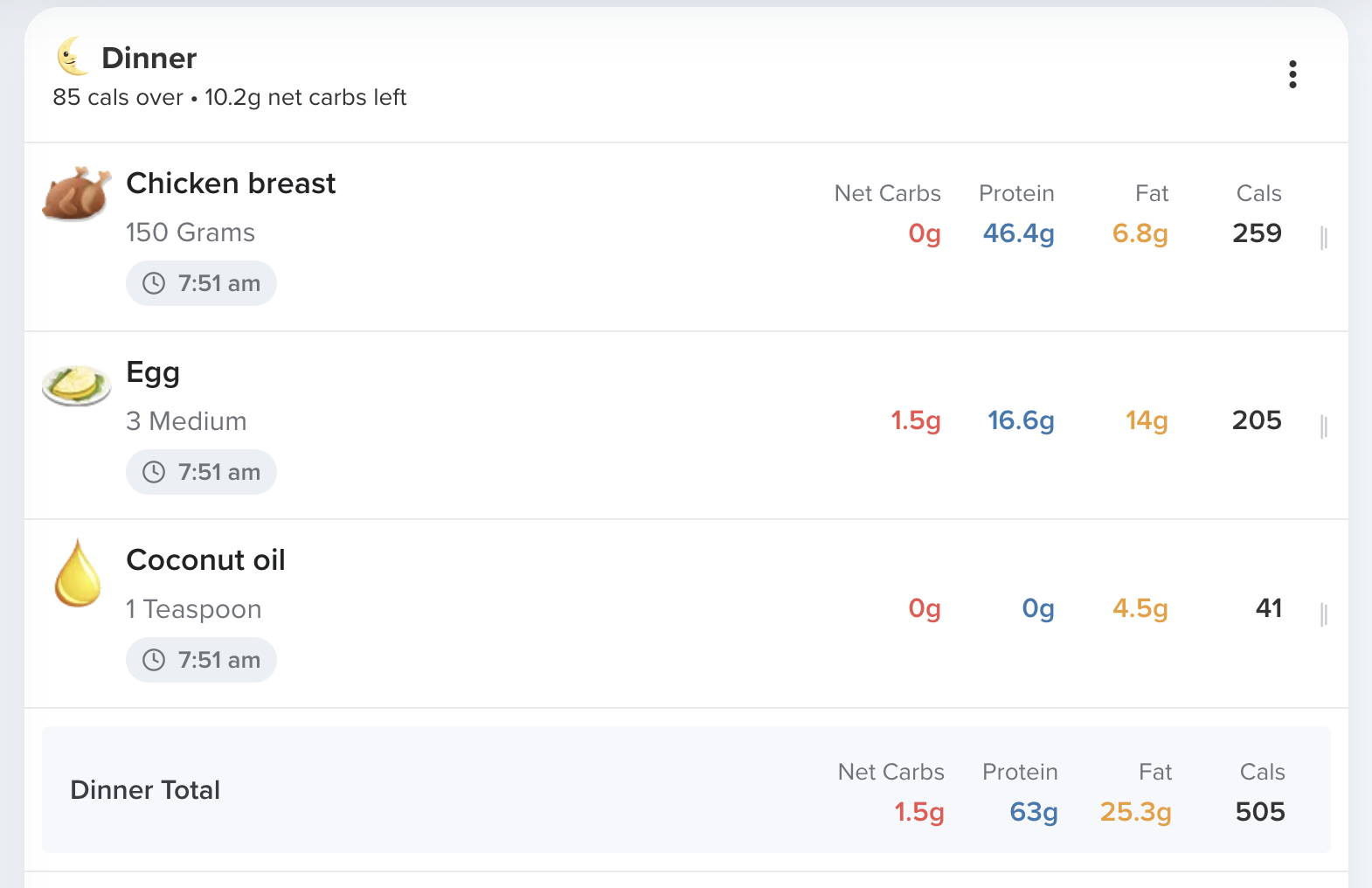 I use blue light blocking glasses every evening from around 6pm.

We also do not allow devices in the bedroom (apart from Kindle) and lower the AC to the minimum so the room is a cold as possible.

I have a daily practice of breathing, cold therapy and meditation.

Some people hate tracking but if you’re really interested in your health, you should at least track some things, for some of the time.

When I’m really dialling things in, I track my progress against my nutritional targets using Carb Manager, my weight and my body fat percentage.

I also connect CM to my FitBit app so I can track my calorie deficit to monitor whether my weight loss is in line with what I would expect.

There are also a bunch of other biomarkers that I recommend to my clients, but that’s for another article. 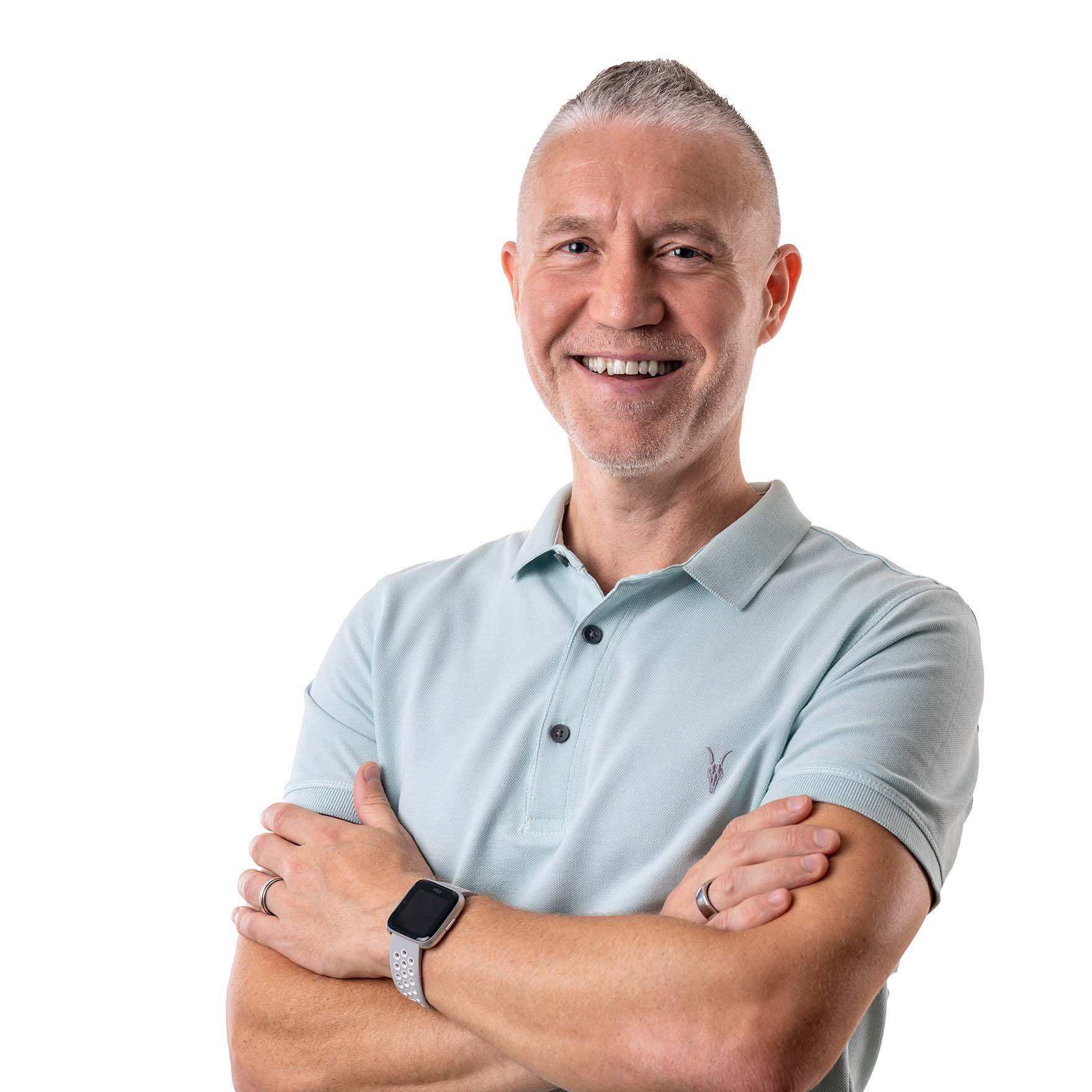